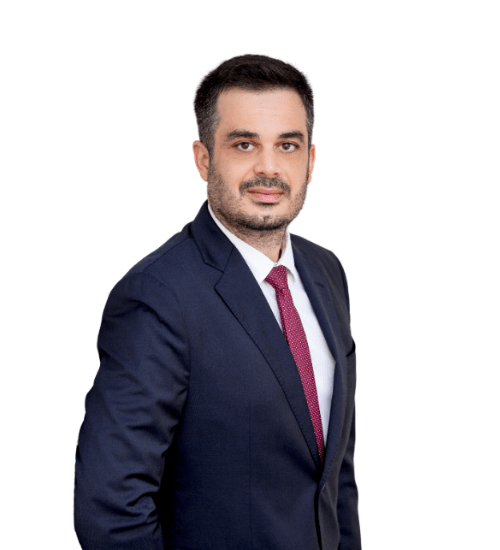 The President of the Hellenic Association of Political Scientists, Mr. Symeon Sidiropoulos, is a graduate of the Department of International and European, Economic and Political Studies of the University of Macedonia, specializing in Politics and Diplomacy. In the period 2009-2010 he completed his Postgraduate Studies on Comparative Policy at Queen Mary University. He holds a Master’s Degree, MSc “Environment and Health” of the Medical School of Athens. He is a PhD candidate in International Economics and Health Policy at the University of Piraeus.

He has specialized in Consulting Public and Private bodies and institutions. He works in the field of pharmaceutical industry as “Public Affairs and Communications Lead” for Greece, Cyprus and Malta, for the company TAKEDA. He is a Scientific Associate of the Laboratory of Economics and Health Management of the University of Piraeus for which he has worked on scientific projects in the field of pharmaceutical industry (Specifar etc.). He worked in the company “KANTOR Business Consultants A.E.”, and as a Consultant – Special Associate of the National Contact Point URBACT Greece – Cyprus, at the Ministry of Development. He has worked as a Special Advisor of the Municipality of Ilida and as a Scientific Associate in the Greek Parliament, while he has collaborated with many Members of the Greek Parliament in the field of Political Communication and assistance to parliamentary work. He worked as a Researcher and Scientific Associate in research programs of the TEI of Athens. He was the Director of the electronic news site www.leksis.net. Registered member of the Athens Chamber of Commerce and Industry (EVEA). He was a trainee of the Greek Ministry of Foreign Affairs in the D1 General Directorate and in the Office of the European Parliament.

He has fulfilled his military duties with an honorary report from the Chief of the General Staff of National Defense (AGETHA). After his military service he successfully completed the Sea Land Border Security and Refuges / Arms / Dual use Goods Control training of the Multinational Peace Support Operations Training Center (MPSOTC) of GEETHA (UN-NATO accredited center).

In 2008 Mr. Sidiropoulos founded EONEPE, the Scientific Group of Young Political Scientists, in which he chaired until 2015, elected in three consecutive electoral processes. In October 2015 at a special meeting of the Board of Directors, he was named Honorary President of EONEPE, honored for his work in it. Since 2015 he is President of the Hellenic Association of Political Scientists (HAPSc) and has been awarded the highest title of the Organization, that of “Αριστίδην” Member and the gold medal of the organization by the Board.

The President, Mr. Sidiropoulos, exercises his duties at HAPSc without salary.

Position: Deputy President of the Board

Dimitris Kritas was born and raised in Drama.
The Deputy President of the BoD of the Hellenic Association of Political Scientists (HASPc) has studied (BA) Political Science (with distinction) and he holds a Master of Arts (MA) specialized in Political Analysis and Public and European Policies (with distinction) from the Department of Political Science of the University of Crete, as well as an Executive Master of Business Administration – EMBA (with distinction) from the University of the Aegean. This period, he is a PhD candidate at the Department of Political Science of the University of Crete. As an undergraduate student, he was awarded with a scholarship by the State Scholarships Foundation (IKY) for his performance, and his research as PhD candidate has been funded by the Research Committee (ELKE) of the University of Crete.
He has worked in public and private sector in different projects and roles as a researcher, project manager, project leader, educator and also consultant. Dimitris is the Field Manager of the Public Policy and Administration Research Laboratory, University of Crete, researcher at the Centre of Political Research and Documentation, University of Crete and scientific associate of the Laboratory of Health Economics and Management, University of Piraeus. He has published several studies in Greek and international Scientific Journals and conferences. He is co-editor of the collective volume “1st Politeia International Conference Proceedings. Europe at the Crossroads: Leadership, Challenges and State of Play” (2021), Associate Editor in Chief in the HAPSc Policy Briefs Series, as well as a member of the Scientific Committee of the EUREOPE Magazine.
He has served the Hellenic Association of Political Scientists as the Coordinator of the Crete’s Delegation (2013-2015), as the Area Manager of South Greece (2015) and as the Vice-President of BoD (2015-2020). He has been awarded for his services with the Silver Medal of the Hellenic Association of Political Scientists (unanimous BoD decision no 01/2021), as well as an Honorable Mention (2014).

Position: General Secretary of the Board

Dr. Stylianos Ioannis Tzagkarakis was born in Athens in 1986.
The General Secretary of the Hellenic Association of Political Scientists (HAPSc) is Teaching Fellow and postdoctoral researcher (paid fellowship from IKY) at the Department of Political Science of the University of Crete. He holds a Bachelor in Political Science, a Master’s degree in “Political Analysis and Political Theory”, with specialization in “Public and European Policies”, and a PhD (title: “Crisis and the Welfare State in Greece 2009-2015: A Critical Analysis”) from the Department of Political Science of the University of Crete. His PhD thesis has been awarded the HAPSc “Katerina Panagopoulou” award as the best doctoral thesis in political science for 2017.
Dr. Stylianos Ioannis Tzagkarakis is a researcher at the Centre for Political Research and Documentation (KEPET) of the Department of Political Science of the University of Crete. He is also a member of the Steering Committee of the ECPR Political Culture Standing Group. He has been visiting researcher at the Department of Political Science and International Relations of the University of Peloponnese from September 2018 to September 2019 and he has worked as a key researcher in several research projects, funded by European and National funds.
Dr. Stylianos Ioannis Tzagkarakis speaks English, Spanish and French and has more than 50 scientific publications in scientific journals, conference proceedings and collective volumes. He has given presentations in more than 40 international scientific conferences and workshops in Greece and abroad. His research and scientific interests focus, inter alia, on social policies, public policies, social vulnerability, social rights, immigration, health and sustainability policies. He is Editor in Chief of the HAPSc Policy Briefs Series, Member of the Editorial Board of the Springer Nature Social Sciences and of the European Journal of Political Culture, and reviewer in 5 international journals.

Position: Vice President of the Board

Thanasis Venitsanopoulos is a Political Scientist, a graduate of the Department of Political Science at Democritus University of Thrace. He completed his postgraduate studies in Political Communication and Public Affairs at Royal Holloway, University of London. During his undergraduate studies, he served as President of the Student Council. He has served as the Delegation Coordinator of HAPSc Youth (Scientific Association of Young Political Scientists) in Komotini, as Section Manager of Northern Greece and Deputy General General of HAPSc. He has successfully completed his military duties at the Hellenic Army. He completed his internship at the US Consulate General in Thessaloniki, in the department of Public Affairs.
He works in London as a member of the lobbying and campaigning team of the the International Authors Forum. In the past, he has worked in the field of consulting and lobbying of multinational companies. He speaks fluent English and German. He has been elected Vice President of the BoD of HAPSc since November 2020.

Iris serves on the boards of and is associated with a number of organisations involved in deciphering the activities of humanity. She is an author, speaker, entrepreneur, whose articles and books on an eclectic mix of issues.
This reflects her firm belief in the power of combining different disciplines in order to arrive at a more balanced and nuanced view of the topic concerned. Iris has spent the last few years researching and writing about the issues that she believes we will face in the fast-changing world of the future.
She studied Economics at the University of Athens and earned her ‘Masters’ at the University of Piraeus, where she is now a PhDc. Together with the continual updating necessary for her business career, she has continued to maintain and widen her knowledge base by undertaking numerous external studies at various institutions including: The Karolinska Institute, Harvardx, and MITx.
She has worked as a College Director, created her own Public Affairs business and worked with politicians, diplomats, entrepreneurs, and academics, as well as speaking at the UN in Geneva. In recent years, as her priorities changed for family reasons, she has focused on her research and authored 12 books. Iris now serves as CEO of Noimosini Limited, London whilst her other interests include being an active Member of the Board of HAPSc.
In addition, she is also a Scientific Associate of the Laboratory of Health Economics and Management of the University of Piraeus. In 2019 she joined the Board of Womanitee – a Greek initiative to create a network of Centres for the Promotion of Female Entrepreneurs, acting under the auspices of the Ministry of Development and Investments, the Ministry of Work, and the Central Union of Municipalities in Greece.

Foteini Theiakou is an Economist and Market Analyst professional in health who has special interest in the international markets as well as market access and policy issues. She currently holds the position of the Deputy Chief Executive Officer at the Internal Medicine Hospital of Athens Spiliopoulio “Agia Eleni”.

Fay received her bachelor’s degree in economics from the National and Kapodistrian University of Athens and her MBA and Master of Healthcare Administration, with honors, from the Sawyer Business School of Suffolk University in Boston, USA. She has also graduated from Tufts Center for the Study of Drug Development where she focused her work on clinical pharmacology, drug development and regulation in the pharmaceutical and healthcare industry.

Fay is a PhD candidate and has written widely on the role of clinical and economic evidence in pharmaceutical decision making.

In her spare time writes poems and plays sports especially basketball and volleyball.

She lives in Athens.

Theodoros Fouskas, Ph.D. is an elected Assistant Professor in Sociology with an emphasis on Migration and Public Health, Department of Public Health Policy, University of West Attica (Greece). He has taught Sociology of Migration, Migration Policy and Integration Policies, and Health of Moving Populations in many institutions. Dr Fouskas has published extensively on migration, precarious employment, access to healthcare, social integration and exclusion. Since 2005, he has participated in many research programmes on migrants, refugees and other vulnerable groups.

He holds the position of Key Account Manager in one of the largest Logistics companies in Greece.

He has been a member of EOPE for many years, having held various positions of responsibility, such as President of the Youth of the Organization, while now he is the Central Treasurer of EOPE.

He has participated in numerous conferences either as a speaker or as an organizing committee. His research and scientific interests focus, inter alia, on issues of health policy, health economics, public policy, social policy, management and marketing.

Elisavet Moundroulea is a graduate of the Department of Economics at the University of Piraeus. She works as a Transfer Pricing Consultant in the International Tax and Transactions Services department at EY.
In January 2019, she was elected for the first time to the position of Central Treasurer of the Hellenic Association of Political Scientists. For the period October 2017 – January 2019, she undertook the Director’s position of the President’s Office of HAPSc. She has been a member of the Association since May 2017. She is a researcher at the Laboratory of Economics and Health Management (LabHEM) of the University of Piraeus since September 2017.
She was distinguished as the Best Executive for the year of 2018 as well as for the month of October of 2017 for her action and contribution to the work of HAPSc.
She speaks English (C2) and German (B2). In addition, she is active in various volunteer groups and has participated in organizing committees of conferences and events. Her interests include among others issues of economics, economic analysis, entrepreneurship and volunteering.